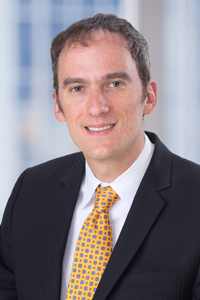 Michael Dube is a versatile and savvy litigator whose practice is presently focused on complex commercial litigation and insurance law.

In 2006, after just a few years of practice, he was recognized as a Rising Star and has been included on that list on a number of subsequent occasions.

In 2008, Mr. Dube relocated with family to Pittsburgh, Pennsylvania and began working for a large law firm, where he represented plaintiffs in FINRA arbitrations (serving as second chair for a client who received the second-highest single-claimant award in FINRA history, $12,000,000). He also defended physicians in sophisticated medical professional liability matters, insurers in insurance coverage matters, and  "dram shops" in high-exposure liquor liability litigation.

Mr. Dube rejoined Sherman Silverstein as of counsel in July 2011 and is thrilled to be back at the law firm at which he started his career. Since re-joining, Mr. Dube served as co-counsel to a plaintiff in a complex commercial arbitration that was awarded nearly $12,000,000, as well as intellectual property rights worth many millions more, and has successfully represented numerous plaintiffs and defendants in high-stakes matters and complex commercial litigation disputes.

B.S., Rutgers College-New Brunswick, 1999
Graduated with honors
Majored in music and administration of justice
President of the Rutgers Poetry Society

Mr. Dube has been quoted in The Los Angeles Times, The Kentucky Herald-Leader, The Thoroughbred Times, and The New York Times, among other publications, and has appeared on various television and radio programs and served as a consultant for various media in connection with sports-law issues such as the Deflategate controversy, and Title IX.

Mr. Dube lives with his wife, who is a history professor, and their young son. Since 2000, Mr. Dube has been a songwriter member of the American Society of Composers, Authors, and Publishers (ASCAP), and has composed music and lyrics for approximately 250 songs.