Alan Milstein on Pfizer and Torcetrapib 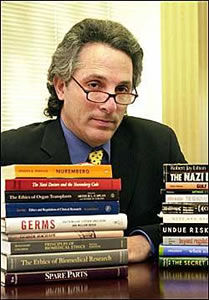 The media coverage of the recent termination of the Pfizer torcetrapib clinical trial has been nothing short of startling in this age of aggressive investigative journalism. In short, the stories have been about Money, Money, Money. In announcing the halt of this experiment after a finding that human subjects had died because of their participation, the New York Times announced, "End of Drug Trial is a Big Loss for Pfizer." Bloomberg broke the story by observing: "Pfizer Shares Drop After Company Abandons Cholesterol Drug." The Toronto Star had a different take: 'Drug Failure Cost Pfizer 23 Billion."

In its front page story, the New York Times further added this remarkable conclusion: "Pfizer will not face the product liability lawsuits that have dogged Merck over its painkiller, Vioxx . . . Patients in clinical trials must sign waivers confirming that they understand the risks they face when they take unapproved medicines in clinical trials." Do they?

Why am I skeptical? Money. Money. Money. Pfizer had long touted this drug in meetings with shareholders, actual and potential, as the Mother of all Blockbusters. Could this potential have delayed the end of this experiment, even though some researchers had long warned that such drugs might actually pose more risks than benefits.

Two aspects of this trial, what surprisingly little we know about it, trouble me. First, the experiment took place largely in the offices of thousands of cardiologists across the country. What this means is that the subjects may have been induced to participate by their long trusted physician and signed on not to better mankind (or "Pfizer") but because they believed their physician thought it was in their best therapeutic interest to do so. This might make the informed consent document neither voluntary nor informed.

Second, Pfizer says the delay in halting the trial was because this was a double blinded experiment with one arm taking Lipitor only and the other adding torcetrpib. Only when the data managing subcontractor removed the blinds were the devastating results revealed.

Call me naive (I've been called worse), but why double blind a study where the data is comprised of good and bad cholesterol numbers? Does anyone believe there could be a placebo response that would raise good cholesterol? I have long advocated that the industry's reliance on this "gold standard" is not always to eliminate researcher bias or that dreaded placebo response. Sometimes it is to keep subjects and physicians in the game. And if this had not been a double blinded study, could the ongoing results have been known to the physicians and disclosed to their patients earlier?