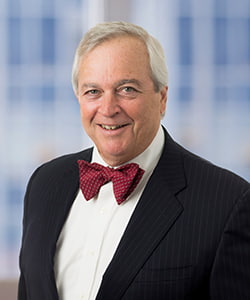 Bruce Luckman is an accomplished commercial litigator. He has achieved notable results for clients in jury, non-jury and arbitration cases before state and federal courts throughout the eastern United States, handling both individual and class action suits.

He represents several national and specialty CRAs in FCRA litigation arising out of individual and class action consumer cases, as well as vendor disputes and compliance issues.

Clients have praised Mr. Luckman not only for his exceptional courtroom presence, but also for a pragmatic, strategic approach that adds client value outside the courtroom. For example, Mr. Luckman has advised clients concerning their FCRA compliance protocols, particularly with respect to processing consumer disputes, reinvestigations, and communications between CRAs and credit data suppliers, and CRAs and consumers.

Outside of the office (and often commuting to it) Mr. Luckman enjoys his motorcycle. He spends his free time trying to learn to cook, exercising in his historic Philadelphia neighborhood, biking, skiing and ice skating with  wife and two children.

Mr. Luckman has taught seminars to seniors at Central High School (Philadelphia) and GIRLS, Inc. (https://girlsinc.org) on building credit, the responsible use of credit and the impact of financial conduct and decisions today on credit history and costs of credit in the future.

He also volunteers as a Philadelphia Election Board Worker and a Motorcycle Escort for the American Cancer Society Annual Bike-A-Thon - Bridge to the Beach Ride.

i. Spokeo/Standing – Successfully moved to dismiss four FCRA consumer cases pending in the Middle and Eastern Districts of Pennsylvania on the grounds the cases alleged an FCRA statutory violation divorced from any concrete harm. All four motions were successful.

2. FCRA Vendor Dispute: Retained by an FCRA Reseller as special litigation counsel in a Chapter 11 Bankruptcy case in which the reseller’s main data furnisher threatened to terminate services which would have destroyed the Reseller’s business.  After vigorous pre-trial motion practice and dozens of depositions, the case was tried over several days, including testimony by three national FCRA experts regarding consumer privacy and FCRA permissible purpose issues. Reseller prevailed at trial on the material FCRA and contract issues and during the appeal successfully settled and reorganized.

ii.   LLC Dispute: represented an equal owner in a hotly contested dispute over control and ownership of a nine-figure LLC with assets throughout the country. The case concerned novel issues under the revised NJ LLC statute, including fiduciary duties and entitlement to dissociation. The aggressive and successful motion practice, including defeating a complex discovery motion over sensitive electronic discovery (ESI) and laptop issues, led to a favorable settlement.

4. Commercial foreclosure litigation: Represented an investor in the successful recovery of millions of dollars in commercial mortgage loans on several Philadelphia residential projects; successfully opposed motions to strike/open confessed judgments, contested bankruptcy stay relief motions, emergency stay requests, and even an effort by a third party by be appointed as conservator for a project under Philadelphia’s Act 135.

i.    Defeated a national bank's Motion to Vacate Final Judgment foreclosing its mortgage against a valuable restaurant property and won an affirmance before the Appellate Division.

ii.   Successfully and cost effectively recovered dozens of properties for investors by way of tax foreclosures, including prosecuting numerous motions for summary judgment and defeating many motions to vacate.