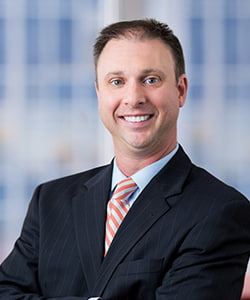 Mr. Chiesa also has expanded his practice to the area of family law, and has zealously represented clients in divorce, child custody, post-judgment issues, and domestic violence matters.

In addition, Mr. Chiesa has considerable experience in municipal court matters, where he has successfully represented persons charged with traffic, disorderly persons, and drug-related offenses.

Bar Associations and Other Memberships

Successfully settled a hotly contested Estate Litigation matter where his clients received significant funds from a sale of a property in Cape May County.

Obtained numerous six-figure collection judgments and has been able to successfully execute on various Defendants’ assets.

Served as co-counsel in a personal injury matter which resulted in a mid-six figure settlement where the client was seriously injured when she was crushed between a tow truck and her vehicle.

Favorably settled an insurance coverage case on behalf of a homeowner against their insurance company after coverage was initially denied.

Favorably settled a slip and fall case after a favorable arbitration award against a casino in Atlantic City, New Jersey.

Obtained judgment on behalf of his client following a bench trial in an Estate Litigation matter, where Mr. Chiesa's client's brother contested a will alleging undue influence, breach of fiduciary duties, and other wrongdoings.

Following a bench trial, Mr. Chiesa obtained joint custody and 50/50 parenting time for a father who was being denied access to his son by the child's mother.

Obtained summary judgment on behalf of defendants in the United States District Court of New Jersey on an alleged breach of a settlement agreement.

Obtained summary judgment against various parties who were alleging undue influence and breach of fiduciary duties against his client in an Estate Litigation matter.