Researcher fights for her notes

Researcher fights for her notes
An anthropologist is the focus of lawsuit.
By Stacey Burling
Philadelphia Inquirer Staff Writer
March 3, 2003 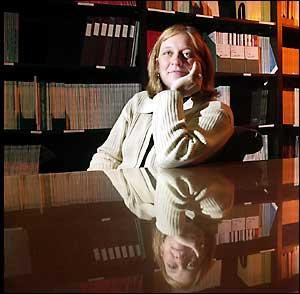 JONATHAN WILSON / Inquirer Anthropologist Sheldon Zink's situation should make researchers aware of the risks in this type of scholarship, says one professor.

Sheldon Zink, a medical anthropologist at the University of Pennsylvania, spent more than 18 months observing an artificial heart experiment at Hahnemann University Hospital.

For the last two months of patient James Quinn's life, she switched roles and became his advocate at the hospital.

Now that Quinn has died and his widow has sued the hospital, the maker of the mechanical heart, and Quinn's original advocate, Zink is in the uncomfortable position of being a coveted witness.

She has received six subpoenas from plaintiff lawyers asking for all the information she gathered while studying the impact of the artificial heart, including her field notes.

Zink, also the director of transplant policy and ethics at Penn's Center for Bioethics, has gone on the offensive. Facing a Wednesday deadline to comply, she and her husband, an anthropology graduate student at Temple University, and some of her students are circulating a petition among anthropologists, seeking support for her position that she should not have to give up the material. They have created a "free Sheldon" Web site (www.freesheldon.org ). Zink is threatening to go to jail rather than give up the notes.

"It would be an extremely, extremely painful and traumatic thing for me to hand over my notes, and I cannot imagine doing that from where I'm sitting today," she said.

Zink argues that being forced to give up her notes and data would violate her professional code of ethics and her First Amendment rights. It also would imperil her ability and that of similar researchers to gather information.

"I think in the future that people are going to think twice before they allow an ethnographer on site if their raw data can be used in court," she said.

While protecting the confidentiality of her research subjects is also important, Zink concedes that is not the key issue in this case because many of the people already have been identified publicly or are easily identifiable.

But, she said, Quinn and his wife, Irene, and others at the hospital trusted her to filter months of information and publish what was germane to her research question: how institutions and people adjust to new technology.

She fears lawyers might use her information out of context because their goals are radically different from hers.

"They're not trying to find out the absolute truth," she said. "They're trying to win an argument."

She said she was willing to be interviewed by lawyers.

The lawyers who asked for the documents represent David Casarett, the original advocate, and Drexel University, which supplies physicians who work at Hahnemann. They declined comment on the subpoenas.

Quinn became the fifth person to receive the fully implantable artificial heart, made by Abiomed Inc. of Danvers, Mass., on Nov. 5, 2001. He lived 10 months with the device but came to regret his decision to join the clinical trial because his quality of life was poor. Irene Quinn filed suit in October, contending that the informed consent process was flawed and that the couple did not fully understand the implications of getting the device.

Alan Milstein, Irene Quinn's lawyer, said he had not asked for Zink's notes and did not plan to do so.

"I would honor her right to the privacy of her notes and let her give her impressions from the witness stand or by way of deposition," he said.

If the other lawyers get the material, however, he would look at it.

"I know that, in general, anthropologists are very, very concerned about protecting the confidentiality of their sources," he said. "It's a matter of fundamental importance to anthropologists as researchers."

The association's code of ethics states that anthropologists may develop "close and enduring relationships" with research subjects, said Carolyn Fluehr-Lobban, a visiting professor of humanities at Colgate University who helped write the code. That relationship has a "kind of sacredness to it" because of the amount of trust involved and is similar to others that are given some protection, like the relationship between a lawyer and client, she said. However, the code has no force of law.

Zink's situation, Fluehr-Lobban said, should make researchers aware of the risks inherent in this type of scholarship.

Legal experts said there had been efforts, unsuccessful so far, to afford scholars the same sort of privilege to withhold information now given to lawyers, doctors, priests, some counselors and journalists.

"There's a constant pull between the people who are advocates of various kinds of confidentiality and people who are interested allegedly in getting at the truth," said Leonard Packel, a professor at Villanova University Law School.

Edward Ohlbaum, a Temple University law professor, said Zink might not be compelled to release information based on her expertise as an anthropologist, but it will be more difficult to fight efforts to get "facts" she witnessed.

In 1998, two Massachusetts researchers successfully fought Microsoft's efforts to gain access to their notes about a competitor during Microsoft's antitrust case. The U.S. Court of Appeals extended some of the protection normally given journalists to the researchers, who also were gathering information for publication.

On the other hand, Rik Scarce, a sociologist who now teaches at Michigan State University, was jailed for five months in 1993 for refusing to answer questions from a grand jury investigating a criminal case involving animal-rights activists he had studied. He argued that he had First Amendment protection and that the American Sociological Association's code of ethics prevented him from testifying. He was held in contempt of court.

He thinks scholars have not taken this legal risk seriously enough. He feels "absolutely distraught" for Zink. "It's a horrendous position for someone to be put in," he said, "but I'm afraid it's also necessary to stand up against courts or against torts."